The photo taken on September 22, 2021 shows the ancient city of Gordion, located about 70 km southwest of the Turkish capital Ankara. (Photo: Xinhua) 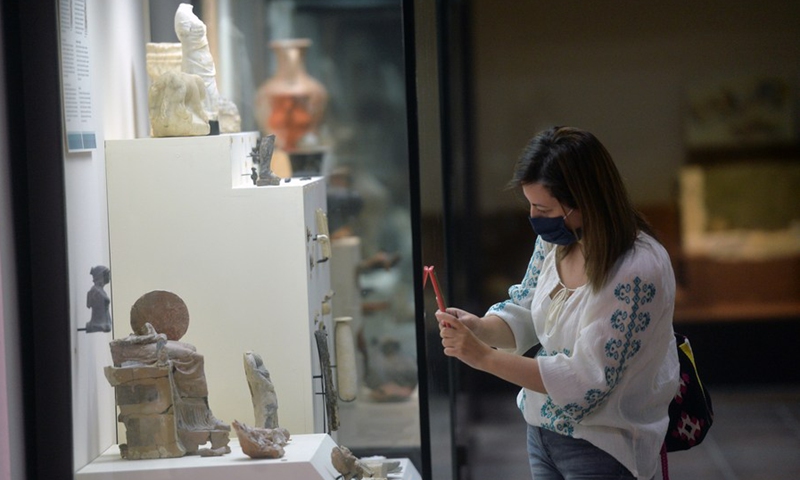 A woman wearing a face mask visits the Gordion Museum in Ankara, Turkey, September 22, 2021. The museum displays Bronze Age pottery, tools and other artifacts from archaeological excavations in the area. (Photo: Xinhua) The ancient Gordion site, where the legendary Phrygian King Midas eternally rests, is expected to be the first site in the Turkish capital Ankara to be on the UNESCO World Heritage List, a move that would boost tourism.

A panel of experts from the International Council on Monuments and Sites recently visited and reviewed the Polatli district near Ankara, where the site is located, and a decision will be made in the coming months.

Gordion, an area about 80 km southwest of the Turkish capital, is full of dozens of burial mounds, man-made hills built over the graves of deceased people.

The Great Mound of Gordion is the second largest burial mound in Turkey, with a height of 55 meters and a diameter of 300 meters, visible from far away.

The ancient city was the capital of the Phrygians who ruled western Anatolia between the 12th and 7th centuries BC.

“There are over 125 burial mounds in this region of Phrygian dignitaries and nobles,” Kadim Koc, researcher and head of a local historical association, told Xinhua.

He is optimistic about a positive decision from UNESCO in early 2022.

“The Phrygians who came to Anatolia from Europe left us with an important legacy, and we want visitors to find out as well,” said koc.

One of the main attractions in Gordion is the Butte de Midas. The site was inscribed on the Tentative List of UNESCO World Heritage Sites in 2012.

Koc explained that the log cabin-like tomb along with its grave goods, furniture and food offerings are all buried under an artificial hill carved out in the late 1950s.

King Midas is an important figure in ancient Greek and Roman legends, infamous for his greed. According to tradition, the king is given the opportunity to wish whatever he wants by Dionysus, the god of wine.

Midas, filled with greed, wishes he had the power to turn whatever he touches into gold, hence the idiom “Midas Touch”.

Midas’ father, Gordias, is the founder of the Phrygian capital Gordion. Some archaeologists believe the mound is actually the burial site of Gordias rather than Midas.

Gordias is also linked to a famous saying that is still relevant today. “The Gordian knot,” commonly used to describe a complex or intractable problem, is attributed to him.

“The intact wooden tomb beneath the Mt Midas tumulus has no equivalent anywhere,” UNESCO said.

Koc believes the site is underestimated as it is not on the list of important archaeological remains in Turkey.

He hopes that once on the UNESCO list, tourists will flock here to discover the enigmatic site.

“We believe this will become a major tourist attraction. We have a duty to promote the region which has been very generous archaeologically to us,” Koc added.